Tangible Cultural Properties of Gyeonggi-do No. 100

Ononsa Guesthouse is the main building of gaeksa that was attached to a government office of Gwacheon-hyeon during the Joseon Dynasty. Gaeksa was an official residence installed in each town, and was used as a lodging for officials traveling in the provinces.
Gaeksa in Gwacheon was built in the 27th year of King Injo (1649) by Governor Yeo Yihong, who built dongheon (magistrate’s office), and, later, seoheon (study room) was built by Nam Changjo in the 7th year of King Hyeonjong (1666), so it is larger than other structures in other regions. This is because the kings of the Joseon Dynasty had to stay there while passing through Gwacheon when traveling south.
The name “Ononsa” was given when King Jeongjo stayed at the gaeksa in Gwacheon, while he was making a royal visit to Hyeonrungwon, and gave a signboard named “Ononsa (穩穩舍)” because “the surrounding scenery is nice, and it is relaxing to rest there.” Dongheon was named “Burimheon (富林軒)” after the old nickname, Burim.
During the Japanese occupation, it was used as a government building in Gwacheon-myeon due to the policy of eradicating national culture by the Japanese, and, in 1932, the existing building was demolished, and the original shape was changed. Then, in 1986, it was dismantled and restored with the reference to the shape of Nagan Gaeksa in Seungju-gun, Jeollanam-do.
The current Ononsa Guesthouse has a 9-room frontage with 3 main rooms and 3 consecutive rooms on the left and the right, and a 2-room side and its shape, a gambrel roof, is featured on the main room of a gambrel-roofed house. the Gyeonggi Cultural Heritage Material No. 9

Hyanggyo is a public educational institution established in the Joseon Dynasty, where the ancestral rites of Confucius and other sages were held and local people were educated. If you were a yangmin (citizen) or higher, you could attend the school
The study of Custodianism, writing poetry and sentences, and the study of Confucian classics, studying the scriptures and history of Confucianism, were the main contents of education, and lectures were given at Myeongnyundang Lecture Hall. There were dongjae ( 東齋 : for the children of yangban (aristocrats)) and seojae (西齋 : for the concubines sones and children of commoner), which are equivalent to today’s dormitories.
Munmyo (文廟 : Daeseongjeon Shrine: Confucian shrine) serves the ancestral tables of the Five Sages of China, including Confucius, Yan Hui, Zisi, Zengzi and Mencius, the two disciples of Confucius, including Zhu Xi and Cheng Hao, and 18 Sages of the East, including Seol Chong, Choe Chiwon, An Yu, Jeong Mong-ju, Jeong Yeo Chang, Kim Gwingpil, Jo Gwangjo, Yi Eonjeok, Yi Hwang, Kim Inhoo, Yi I, Seong Hon, Gim Jangsaeng, Jo Heon, Gim Jip, Song Si-yeol, Song Jun-gil, and Pak Se-ch’ae. On the first day of the spring (February in the lunar calendar) and the autumn (August in the lunar calendar), Seokjeonje (釋奠祭 : the semiannual services in the honor of Confucius) is held, and Bunhyangrye (焚香禮 : memorial service) is held on the first day and the fifteenth day of every month.
Gwacheon Hyanggyo is said to be built in the 7th year of King Taejo (1398). Its original Location was at 2 ri northeast of gwana (government office), Gwacheon, but it was moved to its present Location west of gwana in the 16th year of King Sukjong (1690). In 1959, it was used as Siheung Hyanggyo, according to the military name of Siheung-gun, and, in 1996, it was changed to its original name, Gwacheon Hyanggyo.
The current hyanggyo buildings were repaired in September 1975, with Myeongnyundang, an educational space, in the front, and Daeseongjeon, a space for ancestral rites, in the back, so it was built with a study space in front, and a memorial service space in the back. Daeseongjeon is an ikkong-style building with a 3-room frontage and a 2-room side. There is a poongpan (gable board) on a gabled roof and double eaves. Myeongnyundang, which originally had a 3-room frontage and a 2-room side, has additional rooms on the left and the right sides. Oesammoon (outer three gates) is a sotuldaemun (tall gate) style with a 5-space frontage and a 2-space side, built in 1974, and there is a hongsalmun (a red gate with spiked top) built in front of an eosammun. 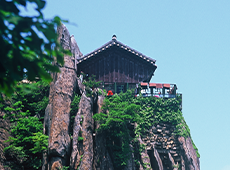 the Gyeonggi-do Monument No. 20

Yeonjudae refers to the place where Nahanjeon Hall (Eungjinjeon Hall: 應眞殿) was built by piling a 30 m-long shaft in the gap between the rising rocks of Yeonjubong Peak in Gwanaksan Mountain Peak. It is a small hermitage built by Great Master Uisang in the 17th year of King Munmu of Silla (677), and it is said that it was originally called Uisangdae.
There are two theories as to why Uisangdae was called the present-day Yeonjudae. One, after the founding of the Joseon Dynasty and the capital moved from Kaesong to Hanyang, the people who missed Goryeo came up here, and missed the old dynasty. Another theory is when Taejong tried to appoint the third prince, Chungnyeong (Sejong) as the crown prince, his two older brothers, Prince Yangnyeong and Prince Hyoryeong, left the palace and stayed here..
Eungjinjeon is called Nahanjeon because Monk Kim Wansong enshrined 16 nahans (Buddha’s disciples) during the reign of King Cheoljong. There are three sacred images of Buddha, which appeared to be modern works. At the entrance of Eungjinjeon, a standing statue of Yaksa Yeorae (Healing Buddha), which is said to heal people’s diseases and give Buddhistic teaching, is enshrined in the rock-carved sanctuary on a hipped roof with a medicine bottle on her left hand and showing abhara-mudra on her right hand. It is presumed to be created during the Goryeo Dynasty (constructed by King Hyoryeong according to the repairing record of Nahanjeon Hall). . 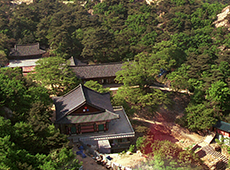 It is a temple located on the south side of Yeonjubong Peak in Gwanaksan Mountain, and is famous as a prayer temple where many people visit, praying for their child’s admission into university during the university entrance examination season.
It is known to have been established by the Great Master Uisang during the Shilla period, and unlike the traditional Buddhist temple architecture, it is unique as it has a two-story structure on a high stone pillar. It runs as a temple stay, so visitors can experience life in a temple. 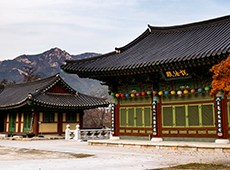 It is a temple built in the center of the city, and is scattered with valuable cultural assets, such as Wooden Seated Buddha, Three-story Stone Pagoda from Munwon-ri, Standing Stone Buddha Sculpture of Munwon-ri Temple Site, etc.